This utensil could only have been invented by the Marquis de Spork. The typical spork, perhaps best known as the white plastic utensil that accompanies take out orders from KFC (Kentucky Fried Chicken), is a spoon with tines like a fork at the tip.

But this masterpiece also has a serated edge for cutting built in.

As one of the sides of the fork!

Just take a look at this, and imagine actually using it on your next forkful of mashed potatoes. 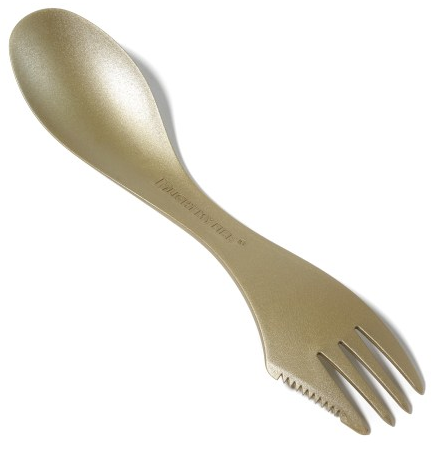 By the way, if you want to see an hysterical treatment of sporks, in a great-for-kids movie (although warning, it does have a little bit of religious overtone), check out the Veggie Tales spoof of Lord of the Rings, called Lord of the Beans:

Even though gasoline prices have dropped recently, this summer’s spike in fuel prices precipitated a sharp new focus on alternative fuels.

Here in Colorado, there is an experiment in using local natural resources as an alternative fuel: 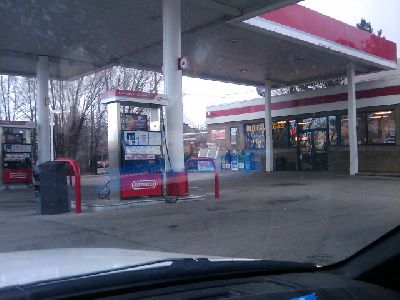 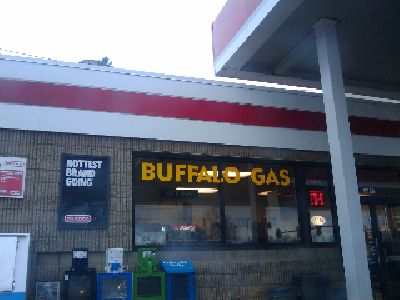 I was out with two colleagues last evening, turning what had been a pitiful excuse for an executive networking event into a very productive Internet and affiliate marketing business meeting. We were sitting in the outdoor dining area of 1010 in Boulder, on Walnut (it was quieter outside than in, so we could talk), when I realized I smelled….a lit fireplace? No, I was outside.

Then Gail, who was facing the street said “is that smoke coming from across the street?!” (I had my back to the street – I know, not safe given how many enemies I have).

We all look, and by golly it is. I reach for my phone, and Sopan gets up and goes into the restaurant and tells a waiter. Rather than calling 911, the waiter inexplicably comes out to the patio to look for himself.

There then ensues a debate about whether it’s a fire, or maybe someone is cooking up on the roof (not entirely implausible as the Med restaurant is on the ground floor of the building in question, and some restaurants in Boulder do have rooftop dining). Meanwhile smoke is clearly billowing, not just whisping as if someone were cooking.

Well, you all know me – I’m an action kinda gal, so I grabbed my phone, ducked under the railing while dialing 911, and ran across the street to the building, and went into the restaurant to ask them was there any known reason for the smoke on their roof. While I’m entering the restaurant, and quizzing a staff member there, I’m also telling the 911 dispatcher the coordinates – she is waiting to hear what the restaurant employee says.

“Smoke on our roof? That’s not good,” he says, and runs off to find the manager.

I relay to dispatch that the smoke billowing off the ceiling is not intentional, and she advises me to leave the building (I already am) and says that the fire department is already on its way.

I cross back over to the other side of the street to join my colleagues, turn to look..and..the smoke is gone. I kid you not.

(Sidenote: I know a lot of people who face this same quandry in their dating habits.)

Fortunately, exactly the right thing happens to satisfy all requirements for moral and ethical serenity – the smoke starts up again (or maybe it never stopped, we just couldn’t see the smoke for the tree in the way), and there is fire but, as you’ll see, not one that had become serious.

The trucks arrive (3 of them!), and the firemen approach the roof – some by stair, and some in the cherry picker! That was very cool to watch!

They were there for well over an hour – maybe two – time flies when your enthralled, and eventually they all come down from the roof and start packing up. I’m still too embarrassed that maybe, still, I had wasted their time, and so despite the urgings of my colleagues, I don’t go ask one of the firefighters what it was. So Gail does.

It turns out that there was a fire – in the chimney – as a result of a not-entirely-properly-completed (?) cleaning of the wood- fired brick fireplace in the restaurant.’

So it was good that I called.

And it was good that it wasn’t actually a roof fire.

My colleagues also insisted that I take pictures – which of course didn’t come out as it was dark, and there were bright emergency lights, and it was a phone camera. But here they are. 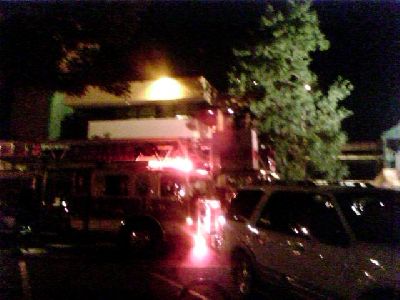 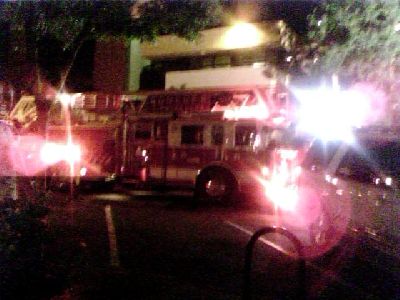 In a Whole Foods, of all places, I encountered the most dunder- headed, unsanitary device ever contrived as a way to make opening a bathroom door ‘more sanitary’.

Let me introduce you to the “Clean Escape” foot-operated bathroom door opener.

The idea is to keep you from touching that icky, dirty, germ-infested, disease-bearing door handle when exiting the bathroom.

You know, with the part of your foot that, when you’re a man standing and peeing, all the urine droplets land on.

Because walking around with someone else’s urine on the top of your shoe is so sanitary.

Now, if you’re not convinced by that visual – just look at the cleanliness level of the door handle, as compared to the “Clean Escape”.

I think I’ll take my chances on Door Handle #1, Alex. 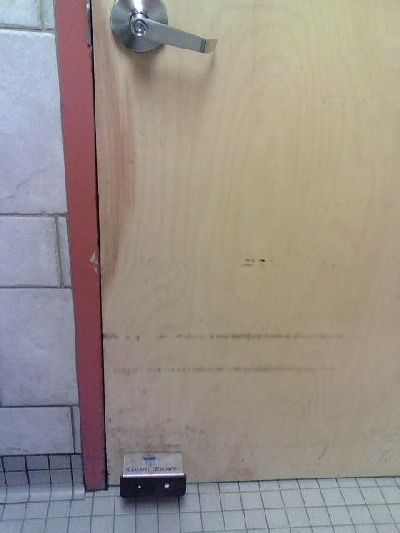 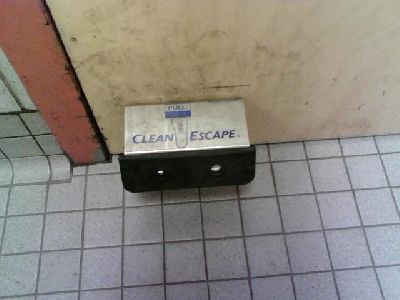 I think I know this guy’s cousin…

Ok, we won’t even let our 9-year-old have headsets – they just aren’t good for their ears. And he only just this past month got an iPod Shuffle, and then only because it was to help on the long road trip during our move, and only to be used with an external speaker (an iCat, in this case).

So, you can imagine my shock, dismay, bemusement, and, yes, revulsion, when I saw this product – the Tadpole Headset and Case. The Tadpole is earphones and an iPod case for children – little children – in the Apple store. Note that it is being pitched as a way to let your child listen to their iPod in car, grocery store, doctor’s office, and STROLLER!!

To see the blatant marketing to toddlers, click on the picture to read the bottom of the package.

Of course, if you don’t share my disgust, feel free to check out the Tadpole here. 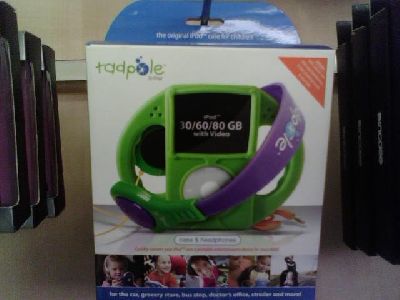 Today we went to Estes Park, Colorado, to see the elk and hear the elk bugling.

Wow! I had no idea what a treat we were in for!

I had wondered how I’d know where to find the elk – someone we know who lives in Estes Park said not to worry – and they were right!

We drove through the center of town, along one of the main streets, and did a double take…

This is someone’s lawn – check out their lawn ornament: 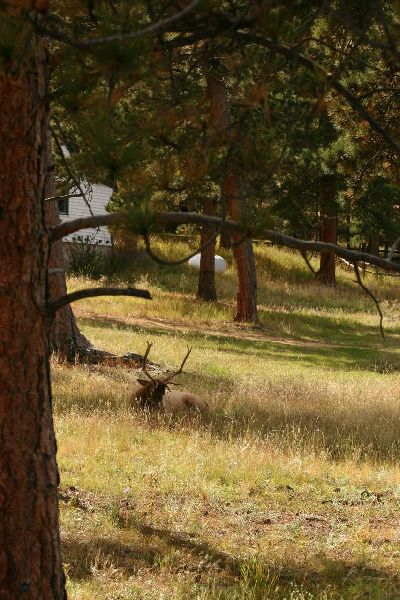 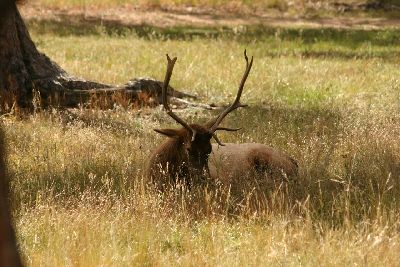 Then we found a small herd near some other houses: 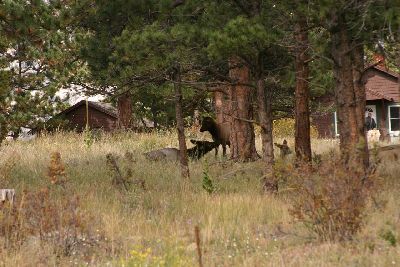 A baby elk getting a nuzzle from momma (laying down): 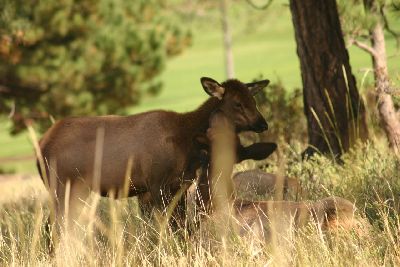 This is the male: 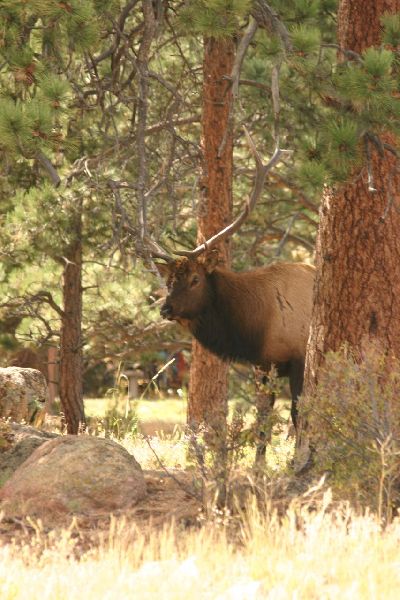 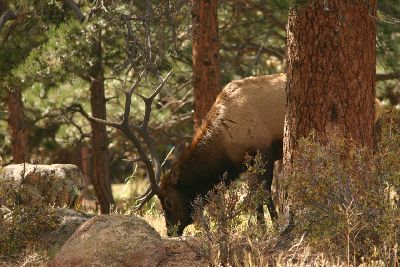 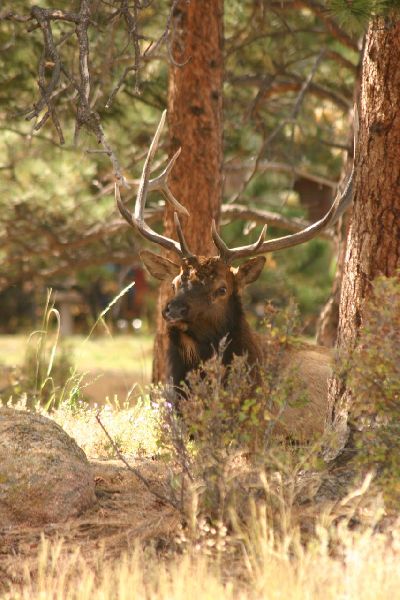 Apparently he’s not as impressed with us: 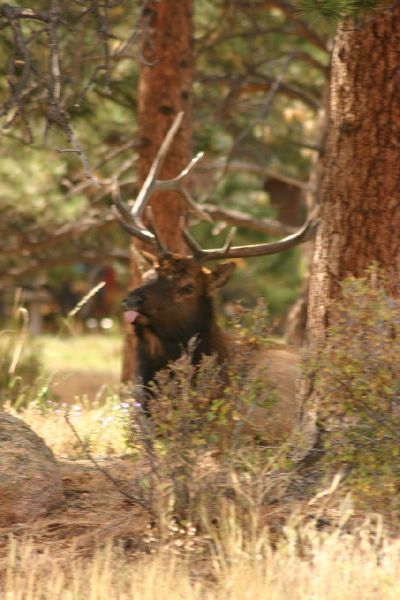 Little did we know that we had yet to discover where the elk really were!
When we found it, we were just stunned. It was incredible. ‘

Not everyone finds it so fantastic though – because they were hanging out on the local golf course. I guess that admiring wildlife isn’t fore everybody.

Here is the herd at the golf course, which is right in the middle of town, near a main intersection – basically like the village green. Note the houses in the background. And behind us is the highway. They are basically right in the middle of town. In fact, in addition to the other elk we saw in peoples’ yards, on the way out of town we saw an elk just strolling right along the side of the road! They are *everywhere*! 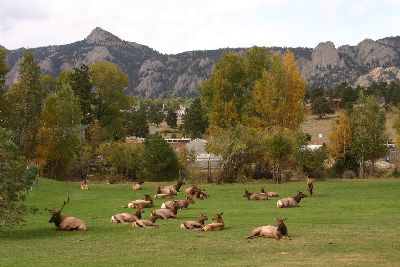 This is the male, also beautiful (as are they all!): 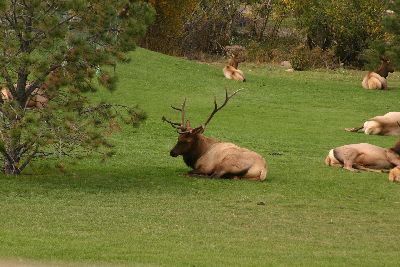 These two calves were so funny – they laid like this, face to face, looking like mirror images of each other, chewing their cud in synch – as if they are playing that mirror game that children so often do. I kept thinking that they would have made a great Doublemint commercial (if you are old enough to remember the Doublemint twins!): 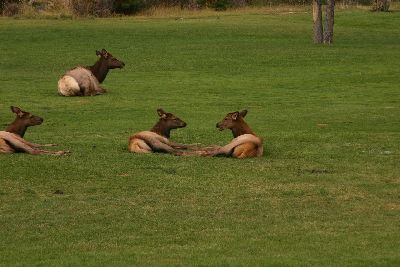 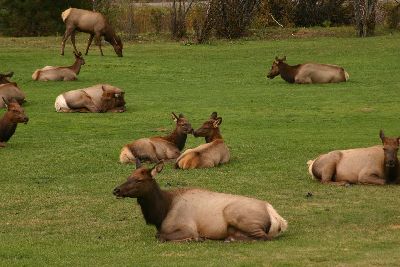 One of the calves wandered off on his own to grab a bit of grazing – he was *sooo* cute!: 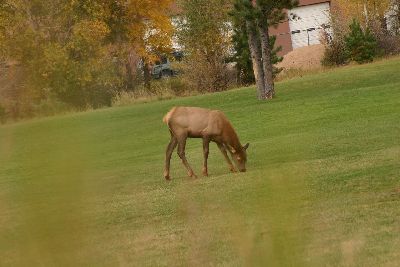 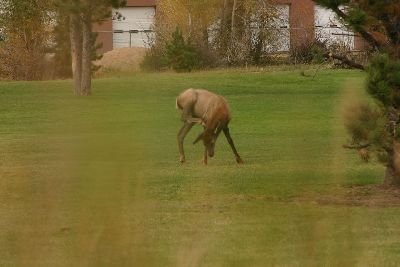 Then he caught up to mom:

We thought that we were going to miss them bugling, as we needed to head back and hadn’t heard any, when suddenly we heard, from far away, what sounded like a rusty gate opening – or somebody blowing too hard on a wooden recorder. It was another male, bugling in the distance. Our male got up, and started encouraging many of the females to get up, although they didn’t actually leave the area. 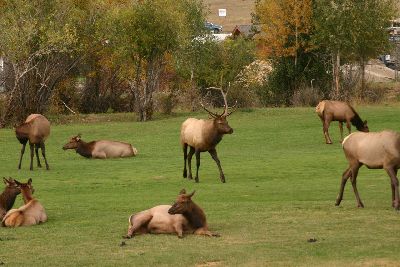 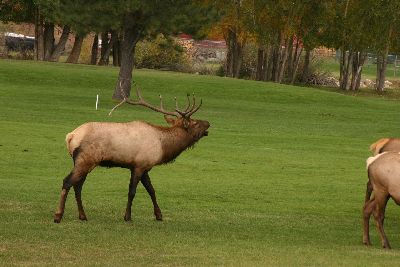 Unfortunately, I didn’t have a video or sound recorder – but then I remembered – my phone! So here is a short video of him bugling – I apologize for the quality (hey, it was a cell phone), but you can still clearly hear him bugling, and it is incredible to see this magnificent animal and realize that this sound is coming from him.

And, if bugling doesn’t work, there’s always the old raspberry (what is it with male elk sticking out their tongue??): 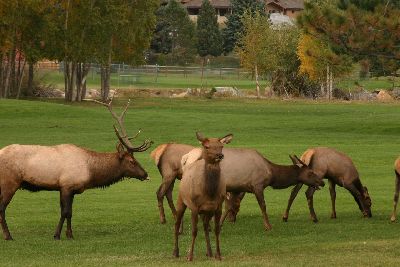 So that was our visit to Estes Park, to see the elk!

When I said earlier that there are prairie dogs everywhere in Boulder, I wasn’t kidding!

Here we see the tip of a large prairie dog town, right next to a very busy city street!

Of course, many people, most notably farmers, don’t think that they are so adorable, and would like to, uh, ‘relocate’ the little critters. Then again, I’d like to relocate many farmers. 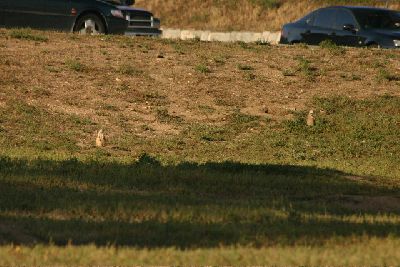 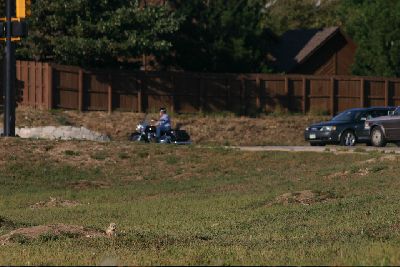 Even the weeds in Boulder get into the hip green act… as evidenced by this “weed” which sprouted and grew in a drainpipe outside organic vegetarian restaurant VG Burgers: 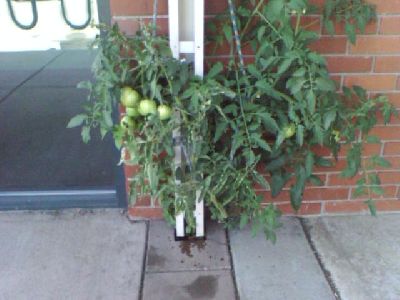 This must be a result of that new math we kept hearing about – or maybe just bad writing: 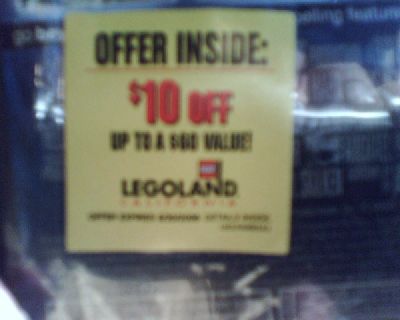