At last, a condom for women who just want to avoid the whole thing.

Imodium, the anti-diarrheal product, must be using the same clue-impaired ad agency that brought us the “Welcome to the Coke Side of Life” ad.

Either their poor chooice of words for their pediatric Imodium ad (see the last few words in the text box next to the bottle) was intentional, or … it wasn’t.

I’m not sure which is worse. 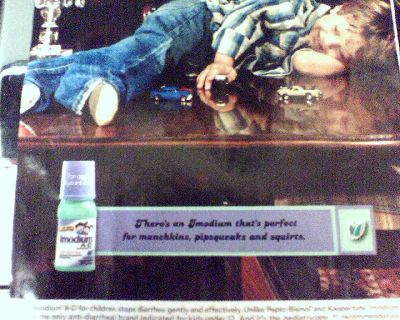 Who is the stupid marketing wonk who came up with Coke’s new slogan, “Welcome to the Coke side of life”?

In a new ad campaign which would be worthy of the Onion, if only it weren’t an actual campaign, the fast food chain Wendy’s has a new advertisement out which pictures two sandwiches clearly containing some sort of meat, with a caption which reads, and I kid you not, “Finally understand the phrase “Whoa, Nelly!”

Obviously this is the answer to “Dude, what’s that meat in the sandwich?”