There is an actual toenail fungus treatment system that works, and I know, because I’ve used it (actually I kinda invented it). Back at the beginning of 2020 I got hit with a double whammy: I was diagnosed with a very rare disorder (fortunately not life-threatening) and coincident, toenail fungus, also known as onychomycosis, decided to take up residence in my left big toe. I’m pretty sure that the fact that my immune system was being messed, what with the onset of the rare condition, allowed that opportunistic little fungus to take hold.

Now, I was super lucky because I caught the little sucker early, when it was just a bright white smear across my toenail. I guess in that way I was fortunate that I had this new immune condition, because it meant I was at the doctor’s a lot, so we saw it, and he told me what it was. Then he told me to soak my foot in bleach water every night, and that it could take up to 2 years to go away. (WTF?)

If you have toenail fungus right now I’m sure that you, like me, have done a ton of research about different treatments, and none of them are guaranteed to work, and certainly none of them are fast. So you search and search, and try different things. Man that onychomycosis is a tenacious little beast. So, after about a week of schlepping the water, pouring in some bleach, making sure that the enbleached water didn’t splash on anything, sitting with my foot in the water – what a hassle – I got one of those Clorox bleach pens; you know the kind that you use on laundry (works great on shower grout too, but don’t leave it on too long, I don’t know if it might break the grout down – hey, I’m a lawyer, not a building contractor).

Of course I was also using the over-the-counter toe nail fungus preparations, namely Kerasal (bet you’ve already tried that, eh? But hang on to it, because it actually is part of the treatment course). My GP (the above-referenced doctor was my specialist for the other condition) confirmed that while this may work, it will take years and the fungus may still come back, but that Kerasal was about the best out there, despite it not being 100% effective 100% of the time, because hey, again, tenacious little sucker. (My GP also told me there is one prescription treatment which he described as a sort of shellac, but that it’s very expensive, and insurance doesn’t cover it. By very expensive, last time I looked, it was about $700. No, that’s not a typo.)

Speaking of my doctors, this treatment system is based on information that I have received from each of them, as well as things that I found in research. Then I put all of that together, and voila! (Hey, look at that, another French word!)

So at this point I’m just going to cut to the chase, because you want to know what I did to cure my toenail fungus. Keep in mind that it still will take a long time. And that it will require you to do things you may not like doing (no no, no live sacrifices involved). Also, the links to products on Amazon are not affiliate links, I don’t make a dime from them; I did this in this article because I want you to understand that this actually worked for me, and I’m not trying to make money off you. (Side note: don’t you hate how you can’t really trust reviews or instructions on websites any more because they all seem to be using Amazon affiliate links, so you can’t really know whether they really love each product, or just want you to click on the links so they make .03 off you?) That said, if you found this helpful, please consider buying me a latte at the end of this post. :~)

Part of the key to this treatment is that you want to deprive your toenail fungus of any chance to grow. Whenever you put any covering (shoe, sock, etc.) over the nail which is housing the fungus you are inviting the fungus to stick around and grow. This is primarily because of the unavoidable moisture that will be trapped by your sock and shoe. On the other hand, when you leave your toe completely exposed no moisture can accumulate. I’m not gonna lie: I wore flip-flops for nearly the entire time it took to get rid of this thing, including around the house. The only time that I put closed-toe shoes on was when I was working out. As I work out at least for times a week, that leads me to point #2:

If you must put on a closed-toe shoe, be sure to use a clean pair of socks, and only wear those socks once. Then take them off and put them in that big pot, so you can’t possibly wear them again until they are disinfected. Here’s my system: I have the big ‘sock pot’ and as soon as I take my socks off, into the pot they go. Then once a week I disinfect them all; the Borax is part of that because it turns out that Borax has anti-fungal properties and is a great laundry additive.

Use both the Kerasal and the Ariella twice a day (morning and night), making sure to cover the entire nail and to get the area up under the edge of the front of the nail.

Only wear closed-toe shoes when it is absolutely unavoidable, and for as short a period of time as possible. Remove socks as soon as possible and put them in the sock pot, do not wear them a second time before they have become disinfected!

When you are ready to do laundry, put about 1/4 cup of Borax into the sock pot, add enough hot water to cover the socks, and a tiny squirt of dish soap. Put the pot on the stove and bring to a boil, and turn off. Once the socks are cool enough to handle wring them out and put them in with your regular laundry. When you do your laundry, add another 1/4 to 1/3 of a cup of Borax along with the laundry soap, and wash in the hottest water that your laundry will allow.

Do this routine consistently, being sure to keep the nail cut short as the infected part grows out. 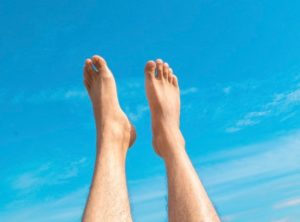