Honest to gawd, I just had the following exchange, word for word, with a product of our school system – which once again illustrates why we homeschool:

[Unknown woman walks up to our front door, flyer in hand, and rings doorbell – unaware that I’ve seen her through our front window]

Me (through closed door): Yes, who is it?

Woman (in tone of voice as if we are long-time friends): It’s Evelyn!

Woman (in tone of voice as if I really ought to recognize her): Evelyn Martinez!

Me: What can I do for you, Evelyn Martinez?

Woman (now switching tone as clearly the fake friend thing isn’t working, as I haven’t opened the door): Are you the lady of the house?

Me: We don’t accept solicitors here.

Wretch wretch wretch. Ok, when I got our fabulous reverse osmosis filter system, I got it to remove icky chemicals from our drinking water. Before that, though, I had a Pur water filter, and I had it for the same reason. Why anyone would want a water filter to instead add chemicals back into their drinking water I don’t know, I’m sure, but that is apparently what Pur is banking on with..wait for it… water filter flavors. 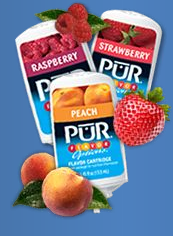 I’m sorry. This is disgusting.

But in case you just have to try it out (or at least see for yourself) you can see the Pur Flavor Options water filter cartridge here.

Oh, if, on the other hand, you actually want your water to be pure, not Pur, check out this cool portable countertop reverse osmosis filter system!

Teachers in a Tennessee elementary school staged a fake gunman attack while on a field trip, telling the sixth-grade school children that it was “not a drill”, while the children cowered crying under tables, believing that they were about to be shot to death. Can a lawsuit be far behind? (Let’s hope not.)

Join in on my rant at Indignation.org.

Are you one of those people who talks with your hands?

How about one of those people who, while on the phone, holds the phone with one hand while talking with the other?

How about one of those people who, while on the CELL phone, holds the phone with one hand while talking with the other?

(Do you see where this is going?)

I was driving on the highway today, doing 65, and I look over and see some guy also driving about 65… one hand holding his cell phone to his ear, and one hand wildly gesticulating with the conversation.

You do the math.

Listen, if you must drive and talk with your hands, get a headset, or a third hand, or something. But don’t share your deathwish with me.

On election day, I got a CNN news flash email. With it being election day and all (and late afternoon) I figured that it was probably some early return election upset or something.. something really potentially important enough to warrant a news flash… So I opened the email and it was the news that Britney Spears had filed for divorce.

Fast forward to last Saturday, and I’m driving along on the highway, behind the wheel, and my husband casually mentions something about Susan Butcher having died a few months ago.

I literally felt the blood drain from my face and upper body, then I went cold all over. I seriously considered pulling over because I wasn’t sure I could drive.

And then I was outraged. Because I hadn’t heard.

Because here an American woman who had won the Iditarod 4 times – truly an American Icon – got so little press when she passed that I hadn’t even heard about it, but Britney Spears’ filing for divorce deserves a CNN newsflash???

WTF is wrong with this country?

I just this moment got in this CNN breaking news story:

President Bush’s policy in Iraq “is not working,” the Iraq Study Group said in releasing its long-awaited report.

No sh*t?? Isn’t that why they convened the study group??

I mean, you don’t have to be anti-Bush, or a Democrat, or blue or pink or yellow or whatever the colour de jour is to realize that things are Not Working in Iraq!

I’m so glad that they convened the Iraq Study Group. I can sleep so much better at night now knowing that they have figured out what millions of people around the world have known for months.

War-torn countries aren’t the only places where atrocities occur where people are voting. And paper ballots aren’t without their own dangers, the concerns over evoting not withstanding.

In discussing this week with some others how I always insist on a paper ballot, I mentioned how rather than a private place to sit and vote, I was directed to a large table in an open area right by the polling line, and the polling assistants. In fact, the polling “docent”, for lack of a better term, was often walking or even standing by me as I was filling out my alledgedly anonymous ballot.

“That’s nothing,” another told me. At the place at which they were voting, they witnessed the poll docent watching over someone’s shoulder as they voted with their paper ballot, and exclaiming “Good choice!”!!!

I don’t even know what else to add to this!

Now, I don’t really care on which side of the illegal aliens debate you fall (and the sides are legion). And I don’t care whether you are for, against, or completely ignorant of, the new Riverside, New Jersey law which makes it a crime to employ or rent a home to an illegal alien (the so-called “hiring and housing’ ban).

But I object, rather strenously, to opponents calling the $1,000 fine a “severe penalty”.

Let’s think about this. If you are hiring an illegal alien, you are probably going to save way more than $1,000 by paying them a pittance compared to what you’d pay someone who was a citizen or here legally (let’s face it, that’s why you are hiring illegal aliens, isn’t it?) And if you are renting housing to illegal aliens, why you are going to make way more than $1,000 in rent in just a few months, and odds are good you are also saving on repairs and maintenance, because you are a slumlord who rents to illegal aliens because hey, what are they going to do, report you to the fair housing board for not taking care of the water and gas leaks, and the cockroaches and rats with which they are forced to sleep?

You want to bitch about money in connection with this new law? How about the $10million that those groups who are calling the law a “severe penalty” are suing the New Jersey town for, claiming that in the mere weeks since the law was passed, their constituents have suffered that much in damages. Groups such as the National Coalition of Latino Clergy and Christian Leaders claim that they need $10million because of the passage of the law has done “irreparable harm” to their members.

Because, yeah, like suing for $10million is going to help their image, you money grubbing scum suckers.

And while we are speaking of sick fncks (cf: previous post on JonBenet Ramsey), what kind of sick fnck tries to fry baby kittens live in hot oil in a frying pan???

Yeah, I really didn’t want to come across this news story, and I sure didn’t watch the video, but police in the Buffalo area rescued (thank goodness) five kittens who were already coated in oil and being popped into the frying pan.

“Authorities say the incident occurred Saturday afternoon in the apartment of a man who was cooking food for an acquaintance he had met at a bus stop. When the apartment’s resident left the kitchen, the acquaintance placed the kittens in the pan of hot grease. ”

I couldn’t make this stuff up.

Read the story about the sick fnck trying to fry the baby kittens in a frying pan here.

Why do I seem to be destined to have my eyes singed by people who insist on wearing thongs – those things that are supposed to make it look as though you aren’t wearing any underwear – in ways that make it obvious that they are wearing a thong?

If the whole point of wearing the thong is to make people think that you have no underwear on (and, hey, you don’t, but at least you get to feel virtuous and pretend to yourself that you do) then WHY THE F*CK are you ensuring that the world sees your thong, along with the crack into which it is wedged?

It’s really too bad that this picture didn’t come out better, so that you could see this phenomenon, which I have christened “Plumber’s Floss”, in action, but take my word for it – the thin black line above the top of her pants is to scale – one thread = one thread – it’s the waistband (and I use the term loosely) of her thong, which you can easily see snaking its way down her gorge for about 2 inches until it hits bottom (really, you can’t see it in the picture, which I was trying to take on the sly (although it did occur to me to ask her “Excuse me, do you mind if I take a picture of your thong and the exposed top half of your plumber’s cleft?” – but then, what if she said “no”?) – but I promise you it’s all there – if you look from her arm on down, it’s obvious where her actual waist is – and where the top of her pants isn’t): 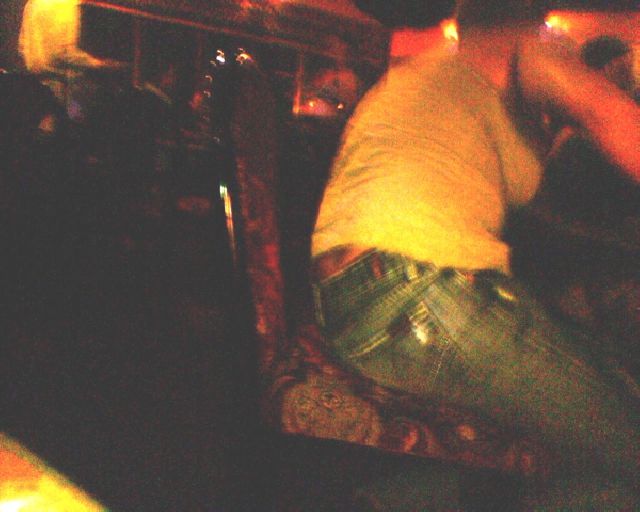 “Plumber’s Floss”. I like that. It has a certain ring to it, and even without a picture, you know exactly what I mean.

Plumber’s Floss. Look for it on a clueless ass near you.