You know how when you are at a restaurant or a coffee shop or some other public place, and some parents are letting their kids run amok, and disturb the other patrons, disrupt the flow of traffic, trip people, and generally create a nuisance? Oblivious to all the stares and dirty looks being thrown their way, and in the general direction of their kids?

Actually I could have just stopped with “oblivious”, I suppose.

Anyways, don’t you just hate that?

Well, that happened to me yesterday at Starbucks, where I was sitting attempting to grade finals. And a lady next to me was trying to study. And everywhere around me people were either keeping to themselves, or attemping to have quiet, polite conversation. Including the two men sitting in the corner, whose two children were running amok.

And I don’t just mean a little amok. I mean a whole lot amok. The two children, perhaps ages 2 and 4 or so, were literally running from one end of the room to the other, cutting right across the path where people walk in the front door, and get into line. Back and forth they ran, weaving in and out of people carrying scalding hot drinks, glass cups, and annoyed looks.

At one point they had a long knitted scarf stretched between them as they ran around, the better to trip people with.

And through it all, the two men ignored them, looking up only occasionally to smile benevolently at their cute little tykes and then go back to their conversation.

I’m sure they appreciated how the entire population of Starbucks was watching their children for them.

I went over to the manager, whom I know (let’s face it, we know all the people who work at all of the Starbucks within a 10 mile radius), and asked her what the policy was when a patron’s children are stampeding. She lamented how there was no policy, and I said that I was myself about ready to go over to the parents and say something.

But I just couldn’t bear it any more, and somebody had to do something. But how to say something without it being confrontational? Hey, I’m a parent, and I understand that it does no good to get a parent defensive about their child.

Then suddenly, I hit on the perfect thing to say. At least, I think so. In fact it brought a grin to my lips just thinking of saying it to them, if only I could pull it off.

I sauntered over to the two oblivious ones, leaned in really close, and very sweetly asked:

“Excuse me, but is one of you responsible for these two children?”

“I am,” answered one of the men, readily.

I leaned in even closer to him, and in a knowing stage whisper tinged with just the right amount of irony, smirked:

“Is one of you responsible for these children? Oh, you are? Because it’s kind of hard to tell.”

Oh, I crack myself up!

And the thing is, it worked. They weren’t offended, they apologized, and took their kids outside to let them run around.

Feel free to use this. Just think of me when you do.

So look what my amazing daughter did – for the first time – to celebrate: 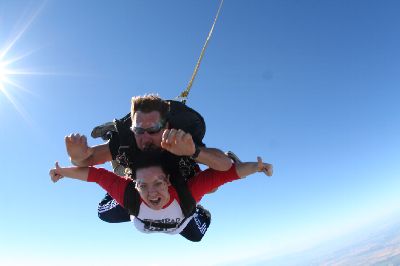 Update! The lawsuit has been dismissed!

A fourteen year old Texas girl and her mother (and let’s face it, it’s really the mother, and the damned lawyers) are suing MySpace because girliepoo went out on a date with Pete Solis, a 19 year old who, they claim, sexually assaulted her.

Apparently the fact that the 14 year old went out with the 19 year old Pete Solis is MySpace’s fault.

Because, you know, it’s wrong for a 19 year old to talk with a 14 year old (which is all that MySpace enabled).

Thank goodness for Solis that he didn’t actually have relations with the girl, or he’d be looking at jail time for statutory relations, and who knows what the girl and her mom would be demanding from MySpace!

Why the f*ck doesn’t anyone take personal responsibility for themselves – and their children – any more?

What the f*ck was that 14 year old doing going out with someone she thought was a high school senior?

And why the f*ck is it MySpace’s fault?

I’ll tell you why. Because the capitalizing leech of a mother wants $30million from MySpace, that’s why.

Whose to say that the girl and her mom didn’t just set MySpace up? Wouldn’t that be sweet, to find out that they looked for someone over 18, just so that they could sue MySpace for the money?

Said MySpace’s Chief Security Officer Hemanshu Nigam “No one is more committed to Internet safety than MySpace. We take aggressive measures to protect our members. Ultimately, Internet safety is a shared responsibility. We encourage everyone on the Internet to engage in smart web practices and have open family dialogue about how to apply offline lessons in the online world.”

*In an interesting footnote, it turns out that Pete Solis is counter-suing, claiming that the girl lied, saying that she was 15. This is relevant because if you are 14 or under, MySpace makes you have a private profile, so that people who don’t know you can’t find you. So it seems that girliepoo intentionally bypassed those protections which the lawsuit claims MySpace doesn’t have.

My father passed away unexpectedly in 1989. It was the end of June. I had just graduated from university, and it was the week that I was packing and moving out to California for law school. I lived in Buffalo, and my father lived near Seattle.

I had seen him just a few weeks before. He had made the trip – not easy for him – out to Buffalo to see me graduate, and to see me accepted in to Phi Beta Kappa. That was very important to him, and he was so proud of me. He himself had graduated Summa from Princeton – no slouch was he.

He had stayed with me, and attended my graduation, and my going away party. I had surprised him by turning that party into a birthday party for him, as his birthday had been just a few weeks earlier. When they wheeled the cake in, which said “Happy Birthday” in Russian (my father had been a Russian translator for most of his adult life, even though he was neither Russian nor had even learned Russian until he was an adult), it was a lovely surprise.

We also had a wonderful, deep talk during that visit. A talk in which I told him how much he meant to me – what a wonderful father he had been and how much he had given me. He hadn’t thought so at all. I made sure he knew. Knew that I loved him dearly, and appreciated those things he had given to me – which I listed for him: a passion for reading, the skill and knowledge of proper use of our language – both spoken and written, a love of classical music, the ability to read and play music, and an appreciation of art.

I had been so excited that I was going to live so much closer to him. I dreamed of the day that I would be a law school graduate, well-employed, and able to help him out. To take care of him.

And then, he was gone.

When the phone rang in the middle of the night that night, I already knew. I won’t say how I knew – that’s a story for another time – perhaps – but I knew. I was already in tears (as, indeed, I am now). I didn’t want to take the call, but of course not taking the call wouldn’t change anything. As I hung up the phone, my first thought was “now I’m an orphan.”

But my very next thought – even in that unspeakable anguish of having just lost a parent, was “I’m so grateful that we had that talk.”

I cannot begin to express how very grateful I was, and am, that I had the chance to say those things to him, and that I said them to him when I did. Because if I hadn’t then, I would never have had the chance. And he would have gone to his grave thinking that he was a terrible father. That might have been his last thought as he sank to the ground (which he did) – that he had failed his daughter.

Instead, he went knowing that I loved him and thought him a wonderful father, who had given me some of the most important things in life.

I am so very grateful for that.

And damn it, if you haven’t said these things – these most important of things – to your father, now, while you can, then do it. Now.

Because at any moment it could be too late.

Today I lost it. It’s true, and I’m ashamed to admit it, but I lost it. Months of being laid up and impeded with an injured back, having had no time – at all – to myself, everybody wanting and needing something from me (customers, employees, my husband, my children – I mean, I love them all – well, ok, I love my huband and my children) and I have had literally zero time for myself.

And so I lost it.

And I said a bad word, and it traumatized our son.

The bad word that I said was “damn”.

Now, I feel terrible for how upset our son was. But even through the haze of my guilt, I have to wonder if this highlights a ray of hope – does the fact that the word “damn” was such a dramatic departure from my usual language and demeanor mean that I’m actually not that bad a mom?