We just spent days and days trying to troubleshoot a fairly horrific vibration noise and vibrating, kind of like a chattering, in our under-sink reverse osmosis filter. We changed all the filters. We changed the auto shutoff valve, twice. We spent hours under the sink tracing the lines. Why did it vibrate so much more in the line to the overflow? And why, oh why, is there only one line to the tank when you both send water to and draw water from the tank? These were the questions in our minds, some of which are still unsolved mysteries. But the mystery of the vibration was cleared up, and it was a shockingly easy fix, especially considering all the time that we had spent trying to figure it out.

As you have probably guessed, it was only by a thorough (and I do mean thorough) process of elimination that we narrowed it down to the only other thing that it could be (other than, you know, replacing the entire system): the check valve.

The check valve is one of the two elbow-shaped valves that are on one end of the housing that houses your membrane filter. According to PureWaterProducts.com, “The function of the check valve is to isolate the membrane from back pressure from the storage tank and to provide a solid wall for the shutoff valve to push against.” 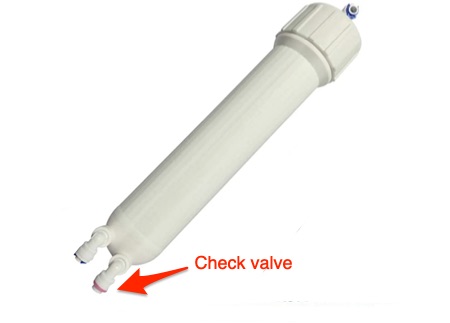 Put a slightly different way, PureWaterOccasional.com (yeah, we don’t quite get the name either) explains that the check valve “is a one-way valve. It allows water to flow toward the drain pipe but prevents it from flowing backward toward the ro membrane. Its function is to prevent backflow into the RO unit in the event of a blocked drain pipe.”

Anyways, once we had, by the days-long, back-aching process of elimination, narrowed it down to the noise having to be caused either by the check valve or Zuul living in the RO system, we took a really good look at that check valve so that we could order the exact same one. Unlike the other various valves in the system, the check valve had a tiny stainless steel disk with a hole in the center of the disk at one end of the elbow.

Now, that noise was driving me crazy(er), so I wanted to replace it (while uttering prayers, smudging, and sacrificing a rubber chicken – anything in the hope this would GET RID OF THAT EFFING NOISE!) as soon as possible. Well, the only place that we could find that had a check valve that looked exactly like the one in the picture, meaning with the stainless steel disk in the end, was this one place that would take several days to get it to me. On the other hand, Amazon had a complete membrane replacement kit, including the housing and the three valves that go on the membrane housing, and even an extra wrench, for just $14.99 and they could get it to me the next day. But while it included a check valve, there was no picture of the bottom (top?) of it to see if it had the stainless steel disk with the hole in the middle. Still, people with the same RO system as mine were saying that it worked although some reviews made it sound like it wasn’t exactly the same check valve, and did I mention that Amazon could get it to me the next day? So I did what any (in)sane person would do. I ordered the one that I knew was the right one. And then I ordered the kit from Amazon so that I could hopefully have some peace and quiet while waiting for the really, really right one to arrive. Because yes, by now I was willing to buy an entire extra kit to get that damned check valve, which I knew at least would fit and be a right one, even if it wasn’t the right one, because it was for a 4-state RO filter system just like mine.

Here is the link to the reverse osmosis membrane with check valve kit that I got from Amazon.

By the way, it’s super easy to change out that check valve. You just turn off the water to the system, and open your tap and drain it (so that water doesn’t spray everywhere when you change the valve). Then you pull the tube out of the old check valve, remove the old check valve by turning it counter-clockwise (it’s threaded – righty tighty, lefty loosey), and replace it with the new check valve. Don’t forget to put a bit of teflon tape on the threads!